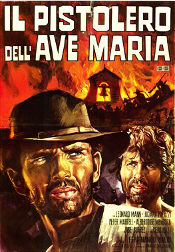 This list is not meant to be a list of the best or the most popular.  What I wanted was a list a list that represented the genre.  I wanted a list about which one might say, "yea, that has a little bit of everything."  The one notable category of Spaghetti Westerns missing is the comedies.  Sorry, I am just not that amused by them and, while they are interesting, I feel that if you leave them out, you really aren't missing anything.  Or, at the very least, you are not missing anything important.

The only order these films are in is a suggested viewing order.

A Fistful Of Dollars
While it was not the first Spaghetti Western, it is widely regarded as the first so it gets the credit.  And, come one, its Clint!

Django
One, its a CLASSIC character.  Two, its Franco Nero!  Three, it shows that Spaghetti Westerns could be about characters and stories.  Starts showing off what a really good dark story teller Sergio Corbucci was; classic. 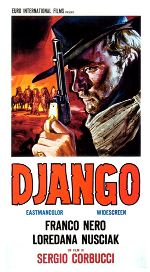 For a Few Dollars More
I may be the ONLY person on earth who would love for Sergio Leone films to just go away.  Still, it is an important film and, it does mark the point where Leone wanders away from story telling and embraces art. Ack!

The Great Silence
Sergio Corbucci at is dark story telling apex.  Just a master work western in the snow.

If You Meet Sartana, Pray for Your Death
I LOVE this insanely convoluted script.  It is class Spaghetti Western low budget fun.

The Hellbenders
Another Sergio Corbucci and a character study.  It is one of a few "the South will rises again" stories.  Well done.

Requiescant
Another "the South will rises again" story, but this time, with a twist.  One of the GREATEST bad guys ever and a GREAT story.  Known for its leftist messaging. 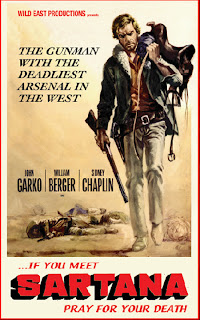 Sabata
Higher budget piece with lots of fun gadgets.  With a nod to James Bond and not wholly unlike Sartana. Oh yea, Lee Van Cleef, hello?

Four of the Apocalypse
An example of the late Spaghetti Westerns.  It is dark, gory and rather oppressive.  Not a happy piece.

Killer Adios
There were a few of these Spaghetti Western who dunnits. Its not especially sophisticated, but you wouldn't expect or want that at all in a Spaghetti Westerns.  Its just enjoyable.

Django Kill...If You Live, Shoot!
Its just weird, but not as weird as Alan Cox and others blather on endlessly about.  A sign of the times you might say. Clearly, its a western made in Europe in the 1960s.  I cannot decide if you should read about this one before you see it or not.  Me?  I read volumes about this movie before I saw it; I assume its good either way. 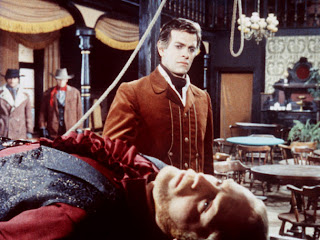 The Forgotten Pistolero
Do you like Greek Mythology.  Then this is your movie.  Seriously, one of my favorites (like Corbucci) because it emphasises story telling. Doesn't always feel like it stays on the rails, but it gets the job done.  GREAT high melodrama.  One of the best sound tracks of the genre.

Django the Bastard
Of the unofficial Django follow-ups, I just enjoy this one the best.  "W Django" could just as easily have fit in this spot.

The Good, The Bad and The Ugly
Again, I want to say that I wish Leone would just go away. Sigh. But, since you made it this far, you might as well see the epic that most feel represents the entity of the genre.  Nevermind, set aside 3 hour and have at it.  It really is a GREAT film.  I just don't think of it as a western really.

Once Upon a Time in the West
Leone at his epic best.  At his best, period.  Its just good.  And, its 3 hours long so knock yourself out.  It is an amazing film and, if the location shots don't make you laugh, you are missing the joke.

Posted by Louis Stone-Collonge at 8:20 PM No comments:

I fell in love with Giulio Petroni's 1967 masterpiece a couple years ago watching a terrible DVD version (probably copied from some worn out old VHS tape).  The color on the copy was destroyed, the picture was hacked for TV and, I sat there stunned by this amazing movie.


Last week I watched the old hacked up version again and just loved it.  And, last night, for the first time, I saw a clean crisp widescreen version of the movie. 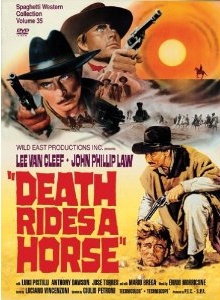 The whole amazing film came to life with color and life.  It is one of those movies that gets better every time you see it.  There is a reason "Death Rides a Horse" is found in most Top Ten spaghetti western lists (SWDB, Quentin Tarantino's).

"Death Rides a Horse" is a fantastic revenge story of about a boy who watches bandits kill his father then rape and murder his mother and sister.  He grows up to be a gun fighter (of course) and sets about hunting down the bad guys.  The films stars Lee Van Cleef (THE quintessential bad ass) and John Phillip Law.

I watched the MGM DVD release which appears to be hard to find.

Reviews of the 2011 Wild East Productions release say its stunning as well; I have it on order.

When reading reviews of spaghetti westerns on Amazon.com, you tend to see a LOT of complaints about the old copies (bad picture and cropping) of these movies.  Me?  I love them.  Its like listening to vinyl LP records; they have all the flaws we used to get watching these movies, late at night, on broadcast UHF channels. If you want the "old school" experience, you should also pick up Spaghetti Westerns 20 Movie Pack from Amazon.com; its only $9.00.  For that price, you just aren't going to have more fun.

The only thing that puzzles me is how the Americans got "Death Rides a Horse" for the Italian "Man to Man" (Da uomo a uomo)  The Italian title is much better.

More on "Death Rides a Horse" from SWDB (lots of reviews and links at the bottom of this page) and IMDB.

The blind hero is a rare, but not unknown, heroic trope seen through out history.  No matter how ridiculous it may seem, it is what it is.

I liked Blindman because it had enough rather original elements to keep things interesting.  It has a blind heroic(ish) gun fighter.  It has a damsel in distress.  It has the classic spaghetti bad guy (this time using the well worn Mexican bandit trope).  This movie also has 50 mail order brides who have been kidnapped and who need rescuing (well, because the blind gun fighter has a contract to deliver them to some miners, of course). 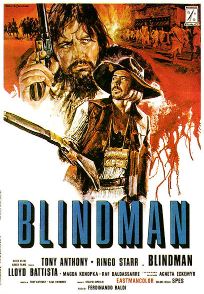 Yea, re-reading that paragraph, it does seem a little odd to me too.  Still, watching the movie you go along for the ride for reasons which are entirely unexplainable.

When I "over think" this movie it looks not unlike Return of the Jedi.  The Blindman is Luke.  The damsel is Leia (a stretch). The evil Mexican bandit is Darth Vader.  The 50 mail order brides are the Ewoks.  Sorry, I thought it so I wrote it.

Blindman is a standard quality B-level spaghetti western with enough oddness to keep you interested.  Along with the standard heaps of gun play and explosions.

Blindman was released in 1971 and was directed by Ferdinando Baldi (The Forgotten Pistolero and Texas, Adios).

Okay, I have to make the obligatory comment about the fact that Ringo Starr is in this movie.  Here it is: Thank GOD he has few and very short lines.  Ick!  Nuff said.

The version of this film I have is on a DVD called "Gunslinger Western Collection."  While I have not seen all the movies in this 2-disk set, the copy of Blindman is decent; fan-freakin-tastic for $6.98 on Amazon.com.

Check out the review on FistFullofPasta.com and IMDB.com.

Also, find more info at Spaghetti Western Database (we like them).

I don't have much to add to what others have already written about this movie.  It is a B Grade Spaghetti Western in the Django franchise (which means is has the name Django in the title).
Directed by Edoardo Mulargia in 1971 (some suggest it was 1972 but those sources are not trust worthy), there is very little original in the film.

I wholly agree with Stanton at The Spaghetti West when he says, that in this film"there are lurking a few nice ideas."  The ending of the movie is just brilliant.  It almost looks as if Mulargia had a great idea for a final scene and the rest of the film was just an excuse to shoot the ending.  The directing and the camera work in the last scene was really good.  And, no, I am not at all sure if this was a result of the rest of the movie being so "B" grade.

The DVD I watched was the DAGORED release from 2005.  Amazon says its the full 90 mins, but the DVD only plays for 80 mins.  Reviews on Amazon always complain about this, but I cannot see how adding 10 mins. back into this movie would change anything other than making purists happy.

Interestingly, this was the first Spaghetti Western I have watched in Italian with subtitles.  Its an interesting experience.  When dubbed in English, you can multi task and tune out the boring bits, but this is not possible when you have to read the dialog (dialog here being of relative value).

Finally, the DAGORED version is from a very abused print.  Me?  I like that part with pops, scratches and color loss; like listening to old vinyl records.  Reviewers on Amazon LOVE to whine about that a great deal (like children).

For sure this is worth watching if you can rent it off Netflix, but only buy it if you are a collector.

Check out the review on FistFullofPasta.com and IMDB.com. 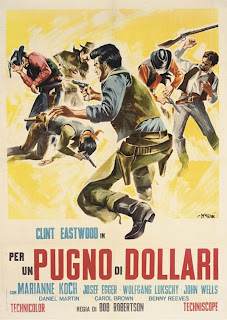 I know, you are all very excited!!

Here are the details as we know them so far:
Our first event is scheduled for January 19, 2012.  Details to follow.  Seating will be limited so contact Louis for details and to be added to the invite list: stonecollonge@gmail.com.

Its going to be a GREAT year!!